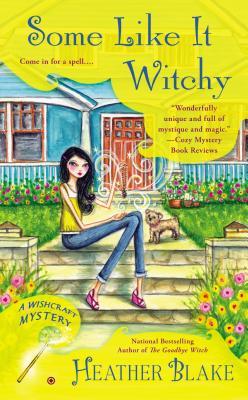 The Enchanted Village is abuzz when the old Tavistock house finally goes up for sale. Darcy’s friend Curecrafter Cherise Goodwin is hoping she will have the winning bid on the home, but Darcy can’t shake the feeling that something bad is about to happen—and her magical instincts are usually right.

Sure enough, while Darcy and Cherise are looking at the property, they discover real estate agent Raina Gallagher stone-cold dead on the floor. Clutched in her hand is a gemstone amulet and, on the wall above her, a large red A. While Raina had no shortage of enemies, there’s also a dark legend about the house itself. To track down the killer, Darcy must unlock the secrets of both the deceased and the estate—and she’ll need to act fast, because revenge is a deal that never closes.…

Some Like it Witchy by Heather Blake is the fifth book in the Wishcraft series and I absolutely loved it. For those not familiar with the series, it’s a cozy mystery series set in a neighborhood in Salem, Massachusetts called The Enchanted Village. Most of the folks who live and work there are non-crafters, but the crafters live there and utilize their crafts (different areas of magical knowledge) to earn their living.

I was riveted to the book the whole time and almost finished it in one sitting. In this series, I usually have some idea of who the villain is, but I’m never 100% sure until it’s revealed at the end. In this particular installment, I had no inkling of who the villain was until the end. The twists and turns in the plot are enough to keep anyone guessing!

Our heroine has been away from the village for most of her life and I like the way Ms. Blake has us learning about the customs/practices right along with Darcy. In every book, we learn a little more about it. This book gives us more clues as to who the Elder might be, but it’s not completely revealed to us.

The supporting characters in this series add so much to the story line and enrich the tales greatly. In this one, we see Mrs. P. in her new role in the series.  I highly recommend the whole series, but this one was absolutely wonderful.  Of course, the sad part is waiting for the next installment in the series.