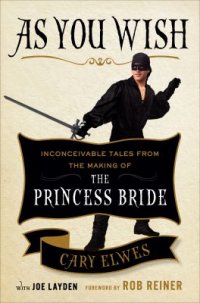 From actor Cary Elwes, who played the iconic role of Westley in The Princess Bride, comes a first-person account and behind-the-scenes look at the making of the cult classic film filled with never-before-told stories, exclusive photographs, and interviews with costars Robin Wright, Wallace Shawn, Billy Crystal, Christopher Guest, and Mandy Patinkin, as well as author and screenwriter William Goldman, producer Norman Lear, and director Rob Reiner.

Cary Elwes was inspired to share his memories and give fans an unprecedented look into the creation of the film while participating in the twenty-fifth anniversary cast reunion. In As You Wish he has created an enchanting experience; in addition to never-before seen photos and interviews with his fellow cast mates, there are plenty of set secrets, backstage stories, and answers to lingering questions about off-screen romances that have plagued fans for years!

With a foreword by Rob Reiner and a limited edition original poster by acclaimed artist Shepard Fairey, As You Wish is a must-have for all fans of this beloved film.

Cary Elwes has a very humble and self-depreciating manner in his narration. He talks about feeling like he is this “nobody” versus Rob Reiner and all the other “Hollywood greats” who worked on the film; not that they ever made him feel that way, it was his own lack of self-confidence. He tells most of the story through his own point of view, but there are parts where the other major actors from the film add their own memories and stories.

Even though he has passed on from this world, Elwes and the other actors do a great job remembering Andre the Giant – sharing stories about him and their interactions with him.

I couldn’t stop laughing while reading all the anecdotes. For me, the best part was that even tho’ I knew some of the stories and the trivia about the movie, it didn’t detract from this book at all. Some stories I knew and some were new to me. Together they made a magical retelling of the making of the movie.

Come live the making of one of the biggest cult-classic movies ever through the eyes of its cast! You won’t regret it!