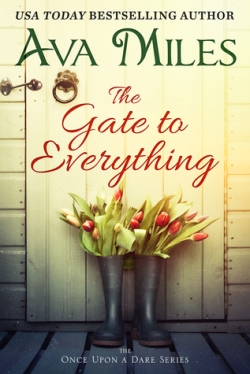 Quarterback Jordan Dean thought he had everything until his long-time girlfriend broke up with him. His football rock star life had become too burdensome to her. Plus there was another teensy, weensy reason. Chef Grace Kincaid had gotten tired of waiting for him to propose. Ouch.

When Jordan wins the Super Bowl, he tells himself it’s enough. But he can’t get Grace out of his mind. When she calls, insisting they meet, he eagerly agrees.
Only to discover he’s going to be a father…

Grace had always wanted a happily ever after—her yellow house, the picket fence, and children—with Jordan. She’s not willing to settle for a shotgun wedding. But hope makes her agree to live next door to him in the dream house he’d secretly had built for her. The fire of their attraction and deep waters of their love reemerge as they become parents for the first time.

The gate between their houses becomes the key—to everything.
And check out Ava’s bestselling family series with a touch of magic, mystery, and romance…

“The Gate to Everything” is the first book in a new series by Ava Miles. The “Once Upon a Dare” series is a spin-off from the “Dare Valley” series dealing with Blake Cunningham’s football brothers. This first installment in the new series was fantastic!

This book focuses on quarterback Jordan Dean and his childhood sweetheart, Grace Kincaid. Jordan and Grace have always been the “golden couple”. They’ve been together through thick and thin with Jordan’s career in football and Grace’s career as a chef. As Jordan’s gotten more and more famous, Grace is having a harder time dealing with the by-product of that fame, the paparazzi and tabloid journalism. Eventually, it becomes too much for Grace, she breaks it off with Jordan, and flees to Italy. Months go by and when Grace returns from Italy, she meets with Jordan to tell him that she’s pregnant. This is when the story really takes off as it has both of them dealing with still being in love with each other, but her still having a hard time with his popularity. Him wanting to keep her and their baby safe but stymied on how to do it.  It’s a fabulous story line that moves along at a decent pace, neither too slow or too fast.

While both characters are richly complex and well-rounded, I definitely connected more with Grace at the beginning, probably because I’m introverted and not comfortable in the spotlight either. I wasn’t so sure about Jordan at first, but as the book went on, I grew to love him even more than Grace. He cares so deeply and yet, like many men, he’s so afraid of being vulnerable in front of Grace. Yet, it’s only by being vulnerable that he and Grace connect at a deeper level.

It’s a great romance on top of being a wonderful insider’s look at what fame and the spotlight must feel like to some spouses of sports stars, male or female. I loved the ending and I’m looking forward to the next one in this series! Pick it up and read it. It’s a great feel-good story!

[I received a free copy of this book from the author/publisher in exchange for my fair and honest review. My review was not influenced by this, nor was I compensated for my review. All opinions and conclusions are my own.]