Well, they’re very late due to life, but here’s a shortened version of the new releases for last week. I didn’t just want to skip it because last week had a lot of great offerings: Several new mysteries from popular authors; new releases from Zadie Smith & Richard Paul Evans; etc.

Swing Time by Zadie Smith – From the multi-award-winning author who brought us White Teeth & On Beauty comes a tale that spans from North West London all the way to West Africa. A tale of friendship that takes two women who love dance into different directions in their life, but along the way they find things that remind them of the other.

The Waiting Room by Leah Kaminsky – Dina is the daughter of holocaust survivors, which somehow always seems to be a shadow over her present, even after she moves to a new city. But, when her new city comes under a terror alert, Dina finds herself facing that past in order to decide whether she will surrender to fear or fight for love.

The Second First Time by Elisa Lorello – Two novelists who have been friends forever attempt to take their friendship to the next level and fail spectacularly. A year later, the duo come back together to take a road trip and try to salvage their friendship. Will they remain friends? Will they become more than friends? You have to read the book to find out!

The Mistletoe Secret by Richard Paul Evans – The master of holiday romance is back with a tale of loneliness and reaching out to find someone in the midst of that loneliness.

No Man’s Land by David Baldacci – John Puller’s mother vanished 30 years ago from Fort Monroe. Now, with his ailing father being accused of the murder, John and his brother, Robert must find out what really happened 30 years ago. (non-cozy)

Turbo Twenty-three by Janet Evanovich – This installment in the Stephanie Plum series has Stephanie going undercover into the Bogart ice cream factory to figure out which employee is killing his/her coworkers. (non-cozy)

The Sleeping Beauty Killer by Mary Higgins Clark & Alafair Burke – “The third thrilling installment in the bestselling Under Suspicion series from #1New York Times bestselling author and “Queen of Suspense” Mary Higgins Clark and Alafair Burke—television producer Laurie Moran puts everything on the line to help a woman she thinks was wrongfully convicted of murder.” (Description from Amazon) (non-cozy)

Chaos: A Scarpetta Novel by Patricia Cornwell – In this latest installment in the Kay Scarpetta series, finds our heroine caught up in a real mystery. She has to figure out how a young lady was seemingly killed by lightning on a crystal clear night. As she does, she also has to unravel the mystery of who is sending her threatening poems through cyberspace. (Non cozy)

Get Me to the Grave on Time by D.E. Ireland – This 4th installment of the Eliza Doolittle & Henry Higgins mysteries finds Eliza and Henry trying to puzzle out who is killing bridegrooms of local weddings before Henry’s niece’s fiancé finds himself among the victims!
** Stay Tuned – In about a month, I will be the blog featured in a blog tour for this book. **

Star Wars Catalyst: A Rogue One Novel by James Luceno – “War is tearing the galaxy apart. For years the Republic and the Separatists have battled across the stars, each building more and more deadly technology in an attempt to win the war. As a member of Chancellor Palpatine’s top secret Death Star project, Orson Krennic is determined to develop a superweapon before their enemies can. And an old friend of Krennic’s, the brilliant scientist Galen Erso, could be the key.” (Description from Amazon)

Treasure & Treason: A Raine Benares World Novel by Lisa Shearin – An ancient power. A team of royals and rogues. The adventure of a lifetime.

Batman: The Silver Age Newspaper Comics Volume 3 (1969-1972) by Whitney Ellsworth; E. Nelson Bridwell; Al Plastino; and Nick Cardy – This is the final volume of the Silver Age Batman newspaper strips. It includes an introduction from Batman expert, Joe Desris, and all strips from June 1, 1969 through April 29, 1972. 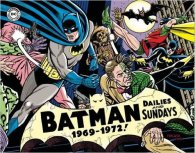