Egg Drop Dead by Laura Childs is the 7th book in the Cackleberry Club series and in my opinion, it’s one of the best in the series. I gave it a 4.5 only because it didn’t have that little extra sparkle or punch to it that bumps it up to the 5 stars. It’s something that’s hard to explain or quantify, but I know it when I feel it!

Maintaining good personal relationships with their suppliers is one of the secrets of the Cackleberry Club café’s success, so Suzanne doesn’t mind going out to Mike Mullen’s dairy farm to pick up some wheels of cheese. She’s looking forward to a nice visit with the mild-mannered farmer before heading back to their hectic kitchen.

But when she arrives, Mike’s nowhere to be found. The moaning of his cows leads her to look in the barn, where she discovers a blood-curdling sight—the farmer’s dead body. Apparently not everyone was as fond of Mike Mullen as the Cackleberry Club.

Churning with grief and outrage, Suzanne, Petra, and Toni vow to find the farmer’s murderer—but as they get closer to the truth, the desperate killer gets whipped into a frenzy and plans to put the squeeze on them…

I’ve always enjoyed the Cackleberry Club series. Suzanne, Toni, Petra, the Sheriff, and Suzanne’s boyfriend, Sam, make it a fun series to read. As with many series, I’ve definitely felt like the later installments have been better written and more fun to read than the first few installments.

Of course, Suzanne finds herself in the middle of a murder investigation once again, this time finding the body of one of their suppliers in his cheese-making room. While she has a vested interest in most of the cases she looks into, Suzanne’s extra invested in this one after finding the body.

This book kept me just riveted. In fact, I think I finished it in one evening on my day off! I just could not put it down. I had no idea who the villain was until Suzanne put it together at the end. In fact, this villain and the one in the book before Scorched Eggs were complete surprises to me. Those two culprits were not on my radar at all!

The single thing that I really didn’t like in this particular book was Petra’s sanctimonious attitude toward Kit. I understand that Petra is very set in her beliefs that a woman should be married before living with a man or being pregnant, but she seemed a little more “over the top” this time than usual and it started annoying me. You’re allowed to have your own beliefs. That’s fine. That’s what America is about, but she just seemed a bit too judgmental in this book.

Other than that, I thoroughly enjoyed this installment of the Cackleberry Club and highly recommend it! 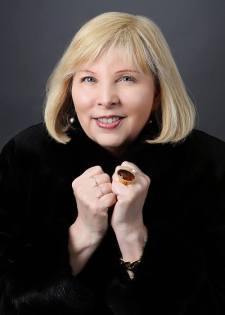 Laura Childs is the New York Times bestselling author of the Tea Shop Mysteries, The Scrapbooking Mysteries, and the Cackleberry Club Mysteries. In her previous life she was CEO/Creative Director of her own marketing firm and authored several screenplays. She is married to a professor of Chinese art history, loves to travel, rides horses, enjoys fund raising for various non-profits, and has two Chinese Shar-Pei dogs.

Laura specializes in cozy mysteries that have the pace of a thriller (a thrillzy!) Her three series are:

The Tea Shop Mysteries – Set in the historic district of Charleston and featuring Theodosia Browning, owner of the Indigo Tea Shop. Theodosia is a savvy entrepreneur, and pet mom to service dog Earl Grey. She’s also an intelligent, focused amateur sleuth who doesn’t rely on coincidences or inept police work to solve crimes. This charming series is highly atmospheric and rife with the history and mystery that is Charleston.

The Scrapbooking Mysteries – A slightly edgier series that take place in New Orleans. The main character, Carmela, owns Memory Mine scrapbooking shop in the French Quarter and is forever getting into trouble with her friend, Ava, who owns the Juju Voodoo shop. New Orleans’ spooky above-ground cemeteries, jazz clubs, bayous, and Mardi Gras madness make their presence known here!

The Cackleberry Club Mysteries – Set in Kindred, a fictional town in the Midwest. In a rehabbed Spur station, Suzanne, Toni, and Petra, three semi-desperate, forty-plus women have launched the Cackleberry Club. Eggs are the morning specialty here and this cozy cafe even offers a book nook and yarn shop. Business is good but murder could lead to the cafe’s undoing! This series offers recipes, knitting, cake decorating, and a dash of spirituality.