Dying on the Vine is the second installment in the Kelsey McKenna Destination Wedding mystery series by Marla Cooper. It was very well-written, but not quite my cup of tea.

Spirited wedding planner Kelsey McKenna juggles a sabotaged wedding and a cold-blooded killer in beautiful California wine country in this hilarious follow-up to Terror in Taffeta.

Wedding planner Kelsey McKenna just signed on to a dream gig. She’s going to be the “day-of” coordinator at the beautiful Higgens Estate in California wine country. There’s only one problem: the wedding was originally planned by Babs Norton, the self-proclaimed Queen of Wine Country Weddings, who the father of the bride has fired.

Kelsey decides to clear the air with Babs and make sure there are no hard feelings, but before she can throw herself into executing the perfect wedding, she discovers Babs dead on the floor of his office. David, Babs’ assistant is quick to point the finger very publicly at Kelsey. Even worse, Kelsey learns that with the big day only weeks away, the bitter little man has sabotaged her new clients’ wedding by canceling all the vendor contracts.

With the help of her friend Brody and assistant Laurel, Kelsey must scramble to salvage the wedding while dodging gossipy wedding planners, grumpy winemakers, and a cold-blooded killer in this smart, funny cozy perfect for fans of Carolyn Haines. (Source: Goodreads)

I had a hard time deciding how to score this book. I ended up giving it 4 out of 5 stars because while I had some personal issues with it, it is still a very well-written book and other people may very well enjoy it.  I, unfortunately, didn’t really enjoy it, which I was disappointed with. I wanted to like it. I had enjoyed the first in the series, Terror in Taffeta, a month or so ago.

There were two things about this book that I just really didn’t like.

First of all, while I like Kelsey’s character as a person, she takes WAY too many chances with dangerous situations. Heroines like this are ones that I tend to call “too stupid to live”.  Most cozy mystery heroines take some chances here or there, but Kelsey just doesn’t seem to stop and think about the danger. Even when the danger is pointed out to her, she ignores the warning and goes and does whatever she was thinking of anyway. Not a good way to operate unless you want to end up dead too early in life.

It’s a well-written book and if you don’t mind heroines who are always running off into danger with no thoughts of self-preservation, then you might very well enjoy it!

** Thank you to NetGalley for providing me with an ARC of this book. I was not compensated for my review. All opinions and conclusions expressed are my own. ** 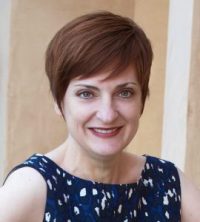 MARLA COOPER is the author of the Kelsey McKenna Destination Wedding Mysteries. As a freelance writer, Marla has written all sorts of things, from advertising copy to travel guidebooks to the occasional haiku, and it was while ghostwriting a guide to destination weddings that she found inspiration for her series. Originally hailing from Texas, Marla lives in Oakland, California, with her husband and her polydactyl tuxedo cat.