This is my 250th post as a blogger! Wow! I can’t believe I’ve made that many posts and that people actually read them!

I’ve had a couple of people asking me to post some of my artwork, so I thought it’d be a great way to celebrate 250 posts! When I make art, sometimes I simply color adult coloring book pages. Sometimes, I make crazy shapes, color them in, and as I’m making these shapes, the artwork just speaks to me on what it should be so then I choose colors accordingly. Sometimes I do decoupage or paint ceramics. Unfortunately, I don’t have pictures of my decoupage or my ceramics, but I do of my coloring/drawing.

Here’s a couple of my recent coloring pages: 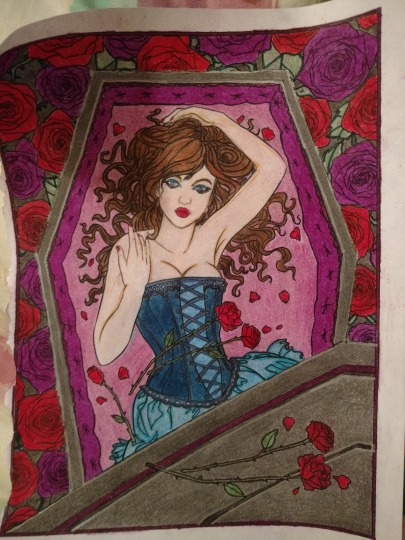 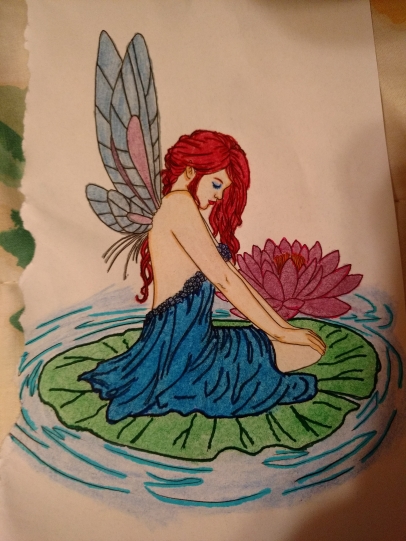 I’ve also found a coloring book group to be a part of on Facebook. Joanna Campbell Slan, an author I like, set it up and it can be found here. Below are two of the pictures I’ve done from there.

I’m actually in the process of coloring a few more of the “Breathe” picture so I can give them to important people in my life who need the reminder to “breathe” from time to time.

Now to share some of my “original” artwork. I’ve never been real good at drawing. If I practice for hours and hours a day, I’d get to the point where I was good, but never great. So, instead, for probably 20 years or more, I’ve made my own type of abstract art. Sometimes, I have a set palette of colors in mind when I start; a set concept for what I want it to represent. Sometimes I don’t know until I get started with it and then I will get a sense and tailor my color choices around that sense. All of these, I already had the concept in my head for what I wanted it to represent. Even still, the shape of the various shapes and the colors aren’t chosen ahead of time. That all happens in the moment.

This first one is all about anger and rage. This one I did as I was processing my feelings from our annual Staff Day. We had a speaker from the police department and at he was talking about gun laws and things like the open-carry laws in Michigan and how libraries aren’t considered protected spaces like schools are. I was doing okay with all that. Then all of a sudden he switched over to active shooters, including videos. There was a complete lack of warning about content of videos. I made it out of the room and didn’t see any of them, but I didn’t make it to the lounge quick enough and I heard the whole first video. I was livid that no warnings had been given about it. There was no “if you don’t feel comfortable, you don’t have to sit here” warning like there was the first time we had active shooter training. It seriously triggered me (and I later learned that it also triggered some others with PTSD). This artwork came out of processing those feelings and triggers. 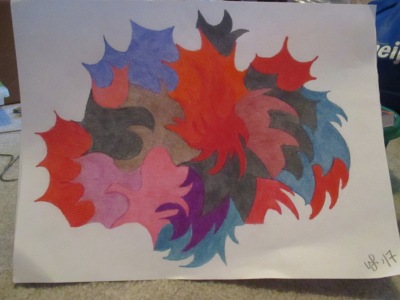 The blue is due to the fact that often when I’m angry and raging, I cry. Messy, ugly crying. Thank god for great co-workers and friends. Also, thankfully, the speaker AFTER the police department was incredibly funny and that help break up some of the tension that was still there after all the ugly crying and breathing to stay grounded.

The first of the following two I did at Staff Day as well. I had actually started it before the active shooter surprise. It’s simply supposed to represent fall and all the brilliant colors we see in fall.  The second one I decided to do after fall. It’s winter, but I’m not that pleased with how it turned out so I’ll probably do another one soon. 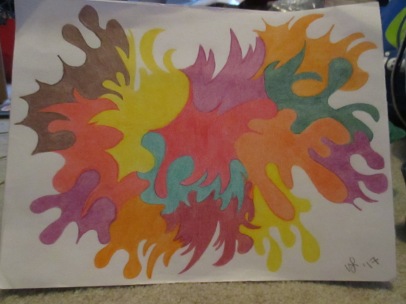 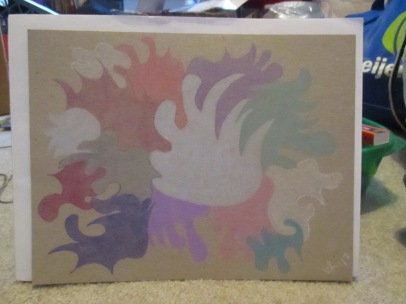 Thanks for joining me a special 250th post! I’ve got a couple of reviews coming up this week for you and other stops on blog tours as well.