Today’s blog post features a book that I’ve been reading to review but not a blog tour this time around! A Deadly Eclair is the first book in the French Bistro Mystery series by Daryl Wood Gerber and it’s a great start to the series. 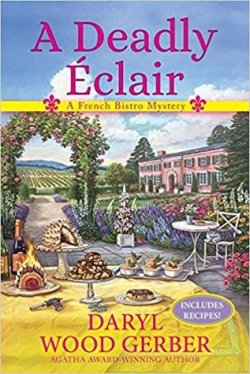 It’s always been Mimi Rousseau’s dream to open her own bistro, but it seems beyond her grasp since she’s been chased back home to Nouvelle Vie in Napa Valley by her late husband’s tremendous debt. Until her best friend Jorianne James introduces her to entrepreneur Bryan Baker who invests in promising prospects. Now, working the bistro and inn until she’s able to pay it off and call it her own, Mimi is throwing the inn’s first wedding ever.

The wedding will be the talk of the town, as famous talk show host Angelica Edmonton, daughter of Bryan’s half-brother, Edison, has chosen the inn as her perfect venue. Anxious, Mimi is sure things are going to turn south, especially when Edison gets drunk and rowdy at the out-of-towners’ dinner, but by the evening, things begin to look up again. That is until six AM rolls around, and Bryan is found dead at the bistro with an eclair stuffed in his mouth. And the fingers point at Mimi, whose entire loan is forgiven in Bryan’s will.

Now it’s up to Mimi to clear her name and get to the bottom of things before the killer turns up the heat again in A Deadly Eclair, the scrumptious series debut by Agatha Award-winning author Daryl Wood Gerber.

As I said above, I think this is a great start to the series and I enjoyed it. I did have a little trouble getting into it, but once it caught my attention, I couldn’t put it down.

Our main character, Mimi, is great. She’s well-rounded, complex, and fun to read about. Her sidekicks, Heather, Jo, and Raymond are all great too. In fact, I almost like Heather and Raymond more than Mimi. Almost. 🙂

The setting descriptions were great, which I’ve come to expect from this author. She usually has a good balance of details and leaving some things to the imagination. I’m totally in love with the fact that the inn and gardens are based on Monet’s house in Giverny. Visiting Giverny is on my bucket list of “someday I’ll get there”. 🙂

The plot line was well done and well-written. I didn’t know who the villain was until very close to when they revealed it, which is always great in a mystery! I like mysteries that keep me guessing. 🙂

I really enjoyed this book. It didn’t quite have enough sparkle and pizzazz to put it over the top into a 5 star book, and it did take me a bit to get into it, but it’s a solid 4 out of 5 stars and I definitely recommend it for those who love cozies and/or other books by Daryl Wood Gerber! Enjoy it!

, which she pens as Avery Aames. She will soon debut the new French Bistro Mysteries

and GIRL ON THE RUN.

Fun tidbit: as an actress, Daryl appeared in “Murder, She Wrote.” She loves to cook, and she has a frisky Goldendoodle named Sparky who keeps her in line!

Visit Daryl or Avery at www.darylwoodgerber.com.

3 thoughts on “REVIEW – A Deadly Eclair”