Welcome! Today I’m hosting a stop on the Great Escapes Virtual Book Tour for The Killing at Kaldaire House by Kate Parker. This is the first in the new Milliner Mystery series. Ms. Parker has been kind enough to provide a guest post for today’s post. Information about the book, including synopsis and purchase links will be below the guest post.

The Art of Edwardian Ladies’ Hats

I’ve always been fascinated by hats. There is something so stylish about an outfit topped off with a brimmed hat. I’ve never been particularly stylish myself. As much as I’d like to wear hats, my head is too big for one size fits most due to a thick skull, not increased brain power. But the cloches in the last seasons of Downton Abbey and the wide brims on the hats in the first seasons held my attention far better than the question of who will go to jail next, Bates or Anna?

In The Killing at Kaldaire House, I knew my sleuth would be a talented milliner as well as an observant student of human nature. But if Emily Gates, my milliner, was going to run her shop, I needed to learn something about hat making techniques at the dawn of the twentieth century. That’s when I found the perfect book: Edwardian Hats, The Art of Millinery (1909) by Anna Ben-Yusuf.

Madame Ben-Yusuf worked in both Paris and London before she settled in New York and taught hat making in Brooklyn. She wrote articles for magazines in the trade which formed the basis for this book.

She spends a lot of time describing how to curl feathers, and the illustration of the feather curling knife gave me the weapon for a future murder. There is a whole section on making different types of flowers out of ribbon and all the practice needed to learn this art. Bows of ribbon, silk flowers, and the use of lace to cover a hat are all special skills.

These delicate touches also had to be cleaned, as clothing wasn’t as disposable then as it is today, and milliners did this work, too. Hot irons were used, along with, depending on the material, steam, soap, alcohol, gum arabic, and gasoline.

Before a designer or maker can make the trimming, however, they first have to make the hat. Hats back then were designed to fit the head and hairstyle of the particular wearer, so they were made individually or in different sizes. Wire frames are made first, and this is where knowledge of geometry was useful. Then material was cut to the pattern so the grain of the fabric all went in the same direction and sewn on. Different stitches were used for the very different materials used to cover hats, such as straw or velvet. This is where Noah and the hat workshop across the alley come in to the story.

As I read this book, I realized how much training Emily would have gone through to reach the point in her career where her hats are sought after. I also found ideas for the story, such as the French style of mourning hat that Lady Kaldaire requires.

I hope as you read The Killing at Kaldaire House, you’ll find where I’ve woven bits of Emily’s profession into the story. Her business becomes a conflict between Emily and Lady Kaldaire, a lady of leisure who doesn’t understand the time required to do all the work required. But with the two of them on the case, they have a chance to catch the killer. 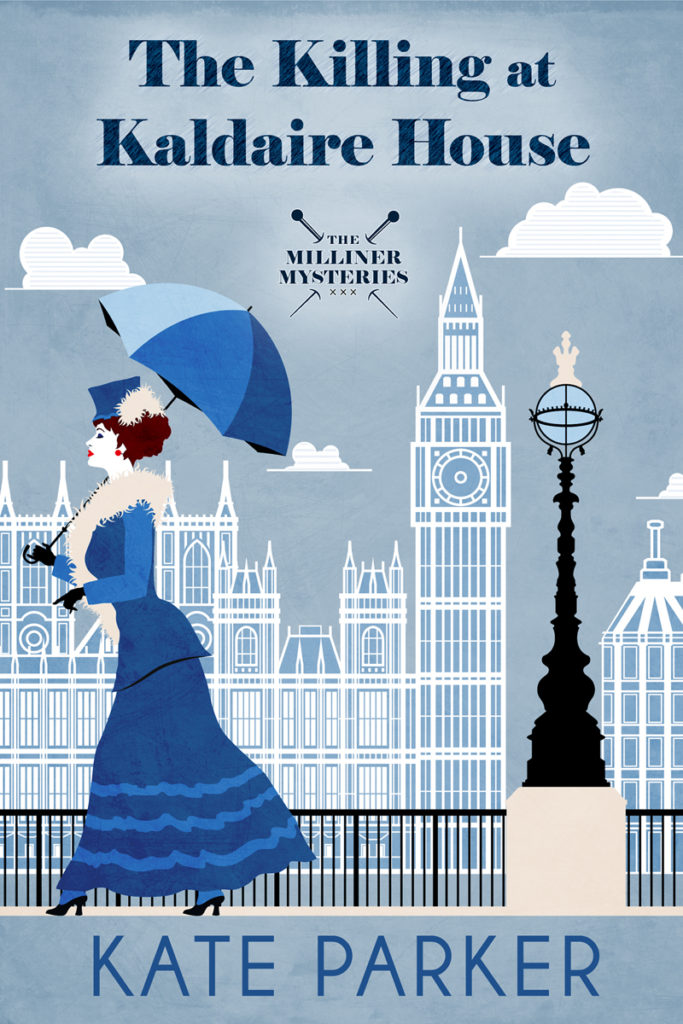 The Killing at Kaldaire House

A dying man. The painting within her reach. What’s a thief to do?

Talented London milliner Emily Gates creates amazing hats for Society ladies, but to collect from those who don’t pay her bill, she burglarizes their homes. She needs every penny to send her deaf brother to school. Late one night, she sneaks in to find Lord Kaldaire badly injured in his study. Unwilling to abandon him, she calls for help.

When Kaldaire dies without revealing who attacked him, his widow agrees to keep Emily’s secrets ― if Emily will help find her husband’s killer. A bigger danger is a Scotland Yard inspector who threatens to arrest Emily — unless she spies on her father’s family of swindlers and conmen. Worst of all are the attacks from an unknown assailant. What will Emily face first, jail or death?

This cozy mystery is set in the era of My Fair Lady and Mary Poppins, of early automobiles and aeroplanes, and of King Edward VII and Sir Arthur Conan Doyle. If you enjoyed the Victorian Bookshop Mysteries, you’ll like Emily Gates and the collection of aristocrats and thieves in her world as they step into the 20th century.

Kate Parker has wanted to travel to 1930s England since she read her mother’s Agatha Christie and Dorothy Sayers mysteries when she was a schoolgirl. After many years of studying science, she decided a time travel machine was out of the question so she found herself limited to reading about the period and visiting historic sites. Her love of this fascinating and challenging period led her to the research from which the Deadly series grew. Eventually, she found it necessary to spend several days in the British Library reading old newspapers, which meant another trip to England. Near Christmas. A sacrifice she’d gladly make every year.

Thanks for joining me today! If you wish to visit other stops on the tour, please click on the banner below to be taken to the main tour page where there is a list of tour participants.