Welcome! Today I’m featuring a stop on the Great Escapes Virtual Book Tour for The Silver Gun, which is the first book in the new Art Deco Mystery series by L.A. Chandlar. It was phenomenal!  Before we get to my review, Ms. Chandlar has graciously written a guest post for today!  The review and information about the book (including purchase links and Rafflecopter giveaway) will be after the guest post.

Historical Antics of the Mayor: Fact or Fiction?

In The Art Deco Mysteries, Mayor Fiorello LaGuardia, the ninety-ninth mayor of New York City, is one of the main characters and I’m sure it’s clear that I personally adore him. I’ve romanticized him a little bit – but his character really is true to form. In the midst of a fictitious story-line, I have a lot of real history woven into the series. In fact, people are often surprised that the most sensational antics are actually the real ones.

My favorite thing about historical fiction is that you get to live in the pocket of a certain time and place. Readers discover things that you just can’t get in a history book. We tend to learn history in pockets, so we don’t realize what else was going on at the same time. Also, I think history books can take all the humanity out of a story. Especially the humor. That’s a pet peeve of mine. So many books have not a whisper of a smile in them, whereas I think humor is essential to a fully realized human being. Fictitious or not.

Many of Fiorello’s antics were taken out of real life. For instance, (this is not a spoiler) there is a scene where Lane and Valerie watch Fio suddenly bound down the steps of City Hall and then look wildly around for his car and driver. Not seeing them and yet needing to get to a fire (he made it a habit to be at the scene of every major fire, car crash, and crime), he pounces on the nearest form of conveyance: a policeman on a motorcycle with a sidecar. As they drive off, he yells to the stunned and chuckling onlookers, “I am not a sissy!” Totally true. It really happened and it still cracks me up as I’m writing this.

I mention often that Fio was loud. He definitely was. He was a bellower with a unique and screechy voice. He did create an office in his car complete with police radio, desk, and gun compartment. The Fire Commissioner gave him an honorary fire coat because he showed up to most fires as a first responder. The Commissioner was noted as often yelling at major fires, “Get the mayor out of there!” because the swashbuckling mayor had joined in the rescue efforts. And Fio was a lover of art and music. He often guest-conducted at symphonies around the city. He played the coronet and using his horn-blowing skill in a particularly humorous way. He quashed the powerful gangster, the Artichoke King, and his monopoly on artichokes with a police escort, a lordly scroll Fio unrolled to declare the King out of business, and two trumpeters on hand to give the whole thing a little panache.

Fiorello was a five-foot-two firecracker of a guy. He was a fighter pilot in WWI, a congressman, and then the ninety-ninth mayor of New York City. He was a minority on both sides: half-Jewish, half-Italian. I love the tension of Fio. He was loud, abrasive and rude, yet he was a total romantic, loved music and art dearly, and always fought for the little guy. Fiorello attended in-person the petitioners that queued up in his office at the beginning of every work day. He was rude and brash, yet he had an incredibly dear heart and fought for those who couldn’t fight for themselves. People who grew up back then always remember him and his voice. The most memorable moment of him that people bring up to me all the time is Fiorello reading the funny papers over the radio for the kids when the newspapers went on strike.

To find out more of the real history, and what parts I created, be sure to read the Author Notes at the end of my books. It’s so fun to find out that reality truly can be stranger than fiction. 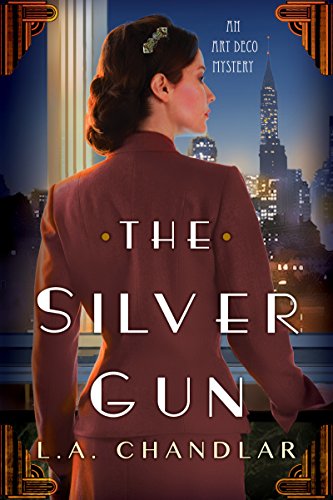 The Silver Gun (An Art Deco Mystery) by L.A. Chandlar

New York City, 1936. In the midst of the Great Depression, the Big Apple is defiantly striving toward an era infused with art, architecture, and economic progress under the dynamic Mayor La Guardia. But those in City Hall know that tumultuous times can inspire both optimism and deadly danger . . .

It’s been six months since Lane Sanders was appointed Mayor Fiorello “Fio” La Guardia’s new personal aide, and the twenty-three-year-old is sprinting in her Mary Janes to match her boss’s pace. Despite dealing with vitriol from the Tammany Hall political machine and managing endless revitalization efforts, Fio hasn’t slowed down a bit during his years in office. And luckily for Lane, his unpredictable antics are a welcome distraction from the childhood memories that haunt her dreams—and the silver gun she’ll never forget.

When Lane gets attacked and threatened by an assailant tied to one of most notorious gangsters in the city, even the mayor can’t promise her safety. The corrupt city officials seem to be using Lane as a pawn against Fio for disgracing their party in the prior election. But why was the assailant wielding the exact same gun from her nightmares?

Balancing a clandestine love affair and a mounting list of suspects, Lane must figure out how the secrets of her past are connected to the city’s underground crime network—before someone pulls the trigger on the most explosive revenge plot in New York history . . .

Wow. This book was just phenomenal. I don’t give 5 stars lightly, but I think this first book in the new Art Deco Mystery series deserves it. I was a little concerned at first as I had a hard time getting into it, but as I do with every book, I gave it 50 pages. It didn’t need that long before it grabbed me and never let go. There was so much action and intrigue in this book. I told my mom at one point that I had thought I was getting to the climax only to find that I was only halfway done with the book!

The characters are awesome. I love Lane and Evelyn and Mr. Kirkland and Finn and all of them! I cannot wait to get to know them further in other books. They’re well-rounded characters and complex.  There are so many things that you learn about them just in this first book!

The plot was brilliant. I read a “professional” review that said it was too formulaic but I think they were wrong. These days it’s hard to find a book that doesn’t follow at least some formula to a degree.  In romance, you’re going to have the getting together, then the problem/break-up and then the reunion and happy ever after. It’s just inevitable. In mysteries, you’re going to have the heroine trying to figure out how to save the day at the end, either by finding the killer/robber/arsonist or by stopping some horrible event from happening. It’s just part of story writing. However, in my opinion, this story had so many ups and downs, so many little climaxes and then ratcheting up the action more that it kept it from being too formulaic.

I’d still consider this a cozy – even with the amount of suspense and intrigue that there was. There still wasn’t much language or physical displays of affection. We had a young, female heroine who wasn’t part of the police or other crime stopping team, though she certainly had plenty of ties there. Plus, when there was a death or killing, there wasn’t a lot of discussion dealing with blood and gore. Nonetheless, this was definitely hopping more with suspense than your traditional cozy.

I absolutely loved this book and HIGHLY recommend it to anyone who is a mystery lover. You should seriously let your fingers run, not walk, to one of the online retailers or to a brick and mortar store and buy this book in some format.

If you do, I’d love to hear your opinion of the book!

L .A. Chandlar is the author of the Art Deco Mystery Series

with Kensington Publishing featuring Mayor Fiorello LaGuardia and a fresh take on the innovation and liveliness of 1930s New York City. Her debut novel, The Silver Gun released August 29, 2017, and the sequel, The Gold Pawn, will release September 25th, 2018. Laurie has been living and writing in New York City for 16 years and has been speaking for a wide variety of audiences for over 20 years including a women’s group with the United Nations. Her talks range from NYC history, the psychology of creativity, and the history of holiday traditions. Laurie has also worked in PR for General Motors, writes and fund-raises for a global nonprofit is the mother of two boys, and has toured the nation managing a rock band.

Thanks for joining me today! If you wish to visit other sites on the tour, please click on the banner below which will take you to the main tour page where there is a list of tour participants!