Welcome! Today, I’m excited to bring you a stop on the Great Escapes Virtual Book Tour for Full Moons, Dunes, & Macaroons, the fifth book in the Spells & Caramels series.  I absolutely adore this series and this one was no exception! 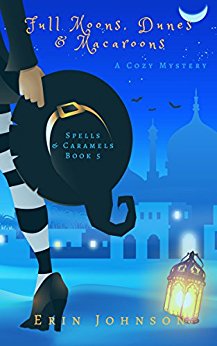 The big day has finally arrived, and Imogen, Iggy and the bakers head to the Fire Kingdom for Hank and Shaday’s wedding. Imogen is totally fine with it—or so she keeps telling herself.

Even the murder of a famous wedding guest can’t stop the impending nuptials. So when Imogen’s repressed feelings magically ruin her baking and she’s banned from the kitchen, she sets herself to finding the killer.

Her search leads her through the desert kingdom’s bustling marketplaces and the maze-like raid, to discover underground movements, shady characters, and more secrets about the people around her than she thought possible. Could the killer be the clever journalist or the rebellious palace maid? Perhaps it’s a member of the royal family.

With the Fire Kingdom’s people churning for change, a mysterious artifact missing from the museum, and a dastardly plot brewing, Imogen begins to feel the heat. When Horace contacts her and makes her a tempting offer, she struggles to choose between him and her new friends.

Imogen’s choice will have enormous consequences over a deadly plot that threatens the people she loves. Will she stop a killer and find a happy ending in the process? Or will an ancient legend come to life and destroy them all?

As I stated above, I absolutely adore this series!  I’ve been a fan of this series since the first book, Seashells, Spells, & Caramels. I look forward to each book coming out! Thankfully, Ms. Johnson writes them quickly so it’s never too long of a wait!

A blogging friend of mine recently said that this was his favorite of the series so far. I’m at a toss-up between this one and the fourth book, Cookie Dough, Snow, & Wands Aglow as to which one is my favorite. I really liked this one, but I really liked the last one too.

I’m totally in love with the characters in this series. I relate to Imogen so much! Our personalities are similar and I can also understand her curiosities and her feeling torn between things. I don’t want to give anything away, so I’m not going to say what she’s torn over.

This book took us to the Fire Kingdom, which was a desert setting with high heat; draping, light fabrics, and good food. The setting descriptions were excellent. I was able to easily imagine all the locations as well as characters and other things.

The plot line was wonderful. It was complex, well thought out, and there were plenty of red herrings as far as whodunit. I was surprised at the end. I hadn’t completely put two and two together this time.

All in all, another wonderful, magical book in the series! If you’re going to read the series, you really do need to start with book one, Seashells, Spells & Caramels. Run, don’t walk, over to Amazon to pick that one up and start enjoying this series! You won’t be sorry!

Thanks for joining me today! I hope you enjoyed the post and want to find out more about this terrific series!  If you’re interested in visiting other spots on the tour, please click on the banner below and visit the main tour page!