Welcome! I apologize as this is very late going up, but I am hosting a spot on the Great Escapes Virtual Book Tour for Bamboozled, the second book in the Mah Jongg Mystery series by Barbara Barrett. I will have an author interview below the review for your reading pleasure as well. 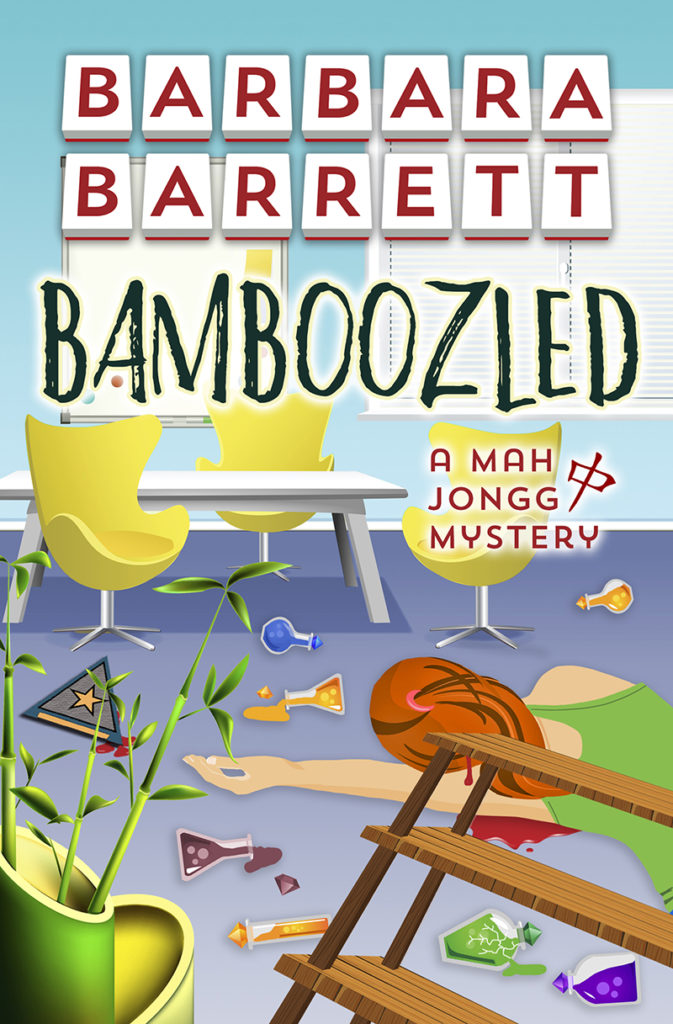 Essential oils distributor Dorcas Wiley is the boss everyone loves to hate. So when she turns up dead, killed by her own trophy, disgruntled saleswoman Cathy Broderick is the obvious suspect in her murder. Despite opportunity, motive and incriminating evidence, Cathy declares her innocence and enlists her mah jongg pals—Sydney Bonner and her cronies Marianne, Micki and Kat—to help save her from the death penalty.

Hot off a recent and nearly deadly investigation, the women are cautious about putting themselves in peril again. Syd’s spouse isn’t thrilled about another mystery in their lives, either, but he can’t resist the plea of Cathy’s husband. Soon, Syd is leading the way as they tangle with grumpy salespeople, the victim’s estranged husband and boyfriend, a mysterious housekeeper, a litigious customer, an annoyed sheriff and Cathy’s own arrogant lawyer.

The women have their own issues to deal with in their central Florida town of Serendipity Springs. Kat faces a health challenge, Micki fields a mysterious inquiry from her ex, Marianne has a chaotic anniversary and Syd wrestles with her husband over who’s really in charge. But nothing puts everyday life into perspective like the moment when their investigation brings them face to face with danger.

This second book in the Mah Jongg Mystery series is a fun read!  I’m still enjoying the characters and the setting. The characters are quirky, well-developed and just fun!

I had a little difficulty getting into the storyline this time. I’m not sure why, but I did. Once I got into the book though, I couldn’t put it down!  Definitely as good as the first, maybe even a little better.

I do recommend starting with the first book in the series, Craks in a Marriage if you want to read the series, but all in all it’s a great book!

Q1: Do you have a day job in addition to being a writer? If so, what do you do during the day?  Do you enjoy your day job?

Ms. Barrett’s Answer: Although I started writing several years ago when I was employed full-time as a human resources analyst, I’m now retired, and my days are my own. When I was employed, I very much enjoyed my job.

Q2: Do you set aside time to write every day or do you write more sporadically? When you write, do you aim to complete a set # of pages or words? How does music/other noise affect your concentration when you’re writing?

Ms. Barrett’s Answer: I am usually engaged in some way in my writing career from around ten in the morning to mid-evening, although I take many breaks and a good share of my writing time is devoted to promoting my books. I usually have no set number of pages to write per day, unless I’m nearing a self-imposed deadline. I don’t play music; instead, I have the television on as background noise. Terrible habit, but it began when I was in high school, and I’ve never broken it.

Q3: When you’re writing, do your characters seem to “hijack” the story or do you feel like you have the “reins” of the story? Similarly, do you outline your book first or just sit down and write, seeing where it takes you?

Ms. Barrett’s Answer: On occasion my characters have seized the story for themselves. I never intended for one of the four characters in my Mah Jongg Mystery series, Katrina Faulkner, to be a blossoming lounge singer, but when I was drafting the first book, Craks in a Marriage, she seemed to grab the microphone from me and run with it. I found I loved the contrast of her introverted persona by day with her more flamboyant songstress personality by night.

I don’t start out by just writing, nor do I outline before I start a new story. Instead, I focus on what my characters want to accomplish, why that is important and what is keeping them from meeting their goals. I try to work out this framework before I write “Chapter One,” but sometimes I get impatient to try out my ideas. Once I’ve completed the first draft, I go through the story and do a scene-by-scene analysis. When it is finished, I review it for holes in the story or the logic. At that point, I might do a very rough outline of what yet needs to be done.

Q4: How did you break into the publishing world? How many rejections did you go through before finding a publisher? Did you ever think about quitting? If so, what did you do to keep yourself hopeful?

Ms. Barrett’s Answer: By the time I started writing (contemporary romance novels), there was so much competition at the large print publishing houses, an unpublished author needed an agent to get her work seen, or she had to final in a writing contest. I spent several years attempting to get an agent and to have my work seen by editors. I lost track of the rejections, because I thought keeping count would only frustrate me. My break came when digital publishing emerged. New digital publishers were seeking inventory, and I was lucky enough to attract their attention. Six years ago, I received my first offer. I published eight books (two stand-alones and two three-book series) with one publisher before I self-published three contemporary romances last summer. I recently added cozy mysteries to my repertoire. Since I was now familiar with indie publishing, they, too, are self-published.

Q5: In general, how many revisions do you go through before a book is published? Do you have beta readers or is it just your editing team and their suggestions? Do you set your books aside for a period of time and then pick them up and edit them?

I generally go through at least three revisions: the first a thorough line-by-line read-through, the second checking for spelling, logic, and redoing phrasing to read better, and the third a sort of catch-all. I don’t have a beta team. Instead, my editor does content and line editing, and she does a second edit once I’ve addressed her comments. I set the draft aside while she’s editing and work on other projects, but she’s fast, so I don’t have much time for the manuscript to gel in my mind.

Q6: A good villain is hard to write. How did you get in touch with your inner villain(s) to write this book. Was there a real-life inspiration for him/her/it?

Ms. Barrett’s Answer: In Bamboozled, the villain is the victim, so there wasn’t much time to develop her before I knocked her off. The more challenging task was to develop plausible reasons why each suspect wanted to kill her without revealing too much about the real killer.

Q7: Do any family members, friends, colleagues, acquaintances, etc. end up showing up in your work or are your characters all truly fictional?

Ms. Barrett’s Answer: So far, I have used the names of two friends in my books although the characters aren’t based on them. I’ve been playing mah jongg for over nine years. In that time, I’ve played with numerous individuals who would make great characters in the mah jongg mystery series, but I’ve made a conscious effort not to base any character on a specific person, as I’d like to still keep playing with them and keep them as friends. My characters and the mah jongg scenes depicted in my books are an amalgamation of my experience and my imagination. A few fellow mah jongg players have read the books, anxious whether they have been portrayed; I think they may actually have been disappointed not to find themselves, although there might have been hell to pay if they did.

Q8: If you could write about anyone fiction/nonfiction, contemporary/historical who would you write about? Why?

Ms. Barrett’s Answer: Although I have a Master’s Degree in American History, I have deliberately steered clear of writing historical pieces because I haven’t been ready to do the research necessary to lend them the credibility I feel they’d need. But should the mood strike me at some point, I’d like to write about the women in the Women’s Auxiliary Army Corps (later the WACs) who trained at Fort Des Moines in my home state of Iowa in 1942. I regret that the idea did not occur to me when I was doing original research for my thesis at Drake University.

Q9: What are some great books you’ve read recently?

Ms. Barrett’s Answer: I’m in two book clubs. Most of the books I’ve read have been our monthly selections. So far this year, these have included The Woman in Cabin 10, Run, Hillbilly Elegy and Little Fires Everywhere. I liked them all but especially Run and Little Fires Everywhere. I am currently reading The Great Alone by Kristin Hannah about the wilds of Alaska, since we are taking an Alaskan cruise in June. After that, I want to get back to mysteries, starting with Glass Houses by Louise Penny. I met her recently at the Malice Domestic 30 conference in Bethesda, Maryland.

Q10: What books have influenced your life the most?

Ms. Barrett’s Answer: Years ago, when I was going through a particularly difficult time in my life, I read Psycho-Cybernetics by Maxwell Maltz, M.D. The book focuses on the role self-image has in helping or hindering someone achieve their goals. I haven’t gone back to the book since, but some of those concepts still reside in my brain and influence my actions. In the seventies, I read Shana by Kathleen Woodiwiss. Until then, I dismissed romance novels as “those books” my mom read. But the emotional tug of this book got me interested in writing romance. (I debated whether to mention the Bible, because I thought everyone must mention it. But after I got this far, I realized I couldn’t finish without adding it to the list. It also has influenced my life.)

Q11: If you could spend one day with a character from your book who would it be? And what would you do during that day?

Ms. Barrett’s Answer: It would probably be Micki Demetrius. She’s a former English teacher from a boarding school back east now turned freelance writer in her retirement. She’s the first one to see shopping as the panacea for any ailment or difficulty. She’s also much brighter than she realizes. She would keep me entertained.

Q12: Do you read your reviews? Do you respond to them, good or bad? Have you ever learned anything from a bad review and incorporated it into your future work?

Ms. Barrett’s Answer: I try not to but sometimes I can’t resist. Though it wasn’t all bad, one didn’t feel there was enough passion between my hero and heroine, that there wasn’t enough depth to their relationship. Though that goal is always on my mind when writing a romance, that opinion sticks with me and prompts me to go deeper with each new couple.

Thanks for joining me today. I do apologize for how late I was in getting this up. If you wish to visit other stops on the tour, please click on the banner below and visit the main tour page.