Oh brother. First I thought this post was due tomorrow and then when I said I’d get it up ASAP, I forgot once I got to work. Please forgive me for the lateness of this post!

Today I’m hosting a spot on the Reads & Reels blog tour for The Harbinger by Candace Wondrak. It was awesome!

The rules of the Second, a list by Faith Blackwell.

One: technology doesn’t work. The Second doesn’t need electricity when it has magic. Two: don’t trust anyone. The Second’s races—the Elven, the Malus, the Ulen and the Dracon—are way too pretty to trust. Three: when someone tells you you’re the new Harbinger, believe them. Bad things happen if you don’t.

Back in the sixties, the last Harbinger permanently opened the gateways between Earth and the Second. Humanity grew accordingly. Faith is in her fifth year at the Academy, with her sight set on joining the Division, the branch of government that enforces what most law enforcement can’t, like smuggling goods between worlds. Following her mother’s footsteps has always been the plan.

Of course, she doesn’t want to follow them to a T. Her mother had awful luck with men, as did her grandma. Faith wouldn’t mind finding out what’s so special about a man that it has her quirky grandma swearing at them constantly. A field trip to the Second is just what she needs.

Being the first female Harbinger in the Second’s history and having to face down the realm’s most dangerous Dracon, also known as the ridiculously-named Dread King? Not what she needs.

Faith isn’t a hero. That sort of responsibility is not what she wants. The perks that come with it—like a sexy but infuriating Elf, a flirty Malus, and a quiet and pensive Ulen—well, maybe for them she’ll make an exception to her grandma’s no-man rule.

Maybe she’ll have them all.

The Harbinger is the first in a slow-burn, reverse harem fantasy series. Expect eventual hot and steamy scenes, coupled with the Chosen One trope, and a heroine who will reluctantly try to save a world that isn’t hers.

This book was awesome! It started out on a high adventure and never slowed down! Faith is a fascinating character. Well-developed and complex and yet a typical impulsive teenager. I also love Cara, her best friend.

The settings are phenomenal. I loved all the details of The Second. It sounds lovely, even with its problems. After all, all worlds have problems but they’re still beautiful in their own ways!

I loved the fact that there was a slow-burn leading up to all the hot and steamy scenes. The author’s not kidding when she says “hot and steamy”. But they were all well done and not clichés.

All in all, I really enjoyed the book and look forward to reading other books by this author!! 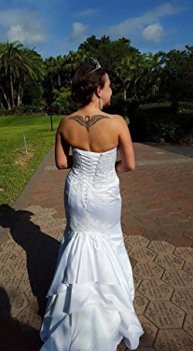 Hey guys! I’m a writer, an office worker, a wife, a mother to two dogs and two cats, and half of a strange pair of young adults who flip the houses they’re living in with the goal of having no mortgage (so that I can eventually focus on my writing career!). Needless to say, I’m busy.

Still, I somehow find time to write, to read, and to enjoy life. Wish there were more hours in the day, really!

Thanks for joining me today and a sincere apology again for the lateness of my post today!  If you wish to visit other spots on the tour, please click the icon below and go to the main tour page!

One thought on “BLOG TOUR – The Harbinger – REVIEW”