Good morning! I apologize for being a bit late getting this up, but I’m happy to be a stop on the Great Escapes Blog Tour for Ink, Read, Dead by Joanna Campbell Slan! I love this series and it was nice to revisit this early case! Today we’re bringing you a character guest post and a review of the book! 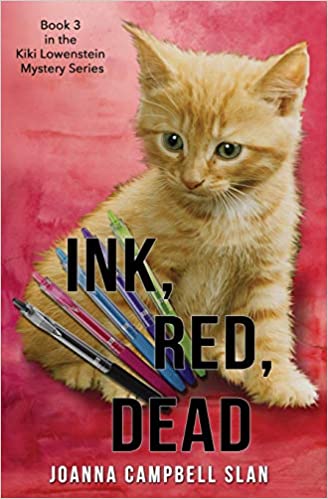 On a sweltering day, ace scrapbooker Kiki Lowenstein has to cancel a crafting party when she discovers Marla Lever, their hostess, nearly dead of the heat. Not only is Marla seriously “under the weather,” she’s also a hoarder, and her home is a house of horrors, complete with a corpse in the cooler. Meanwhile, Detective Chad Detweiler works a cold case that involves women disappearing all over St. Louis. The attraction between Kiki and Detweiler heats to a red-hot fever pitch, but will it boil over and leave both of them feeling burned?

I never thought that having paper crafting events outside of the store was a good idea. (Underline ‘never,’ okay?) But my boss was determined for us to try this. Imagine my surprise when I discovered our hostess was a hoarder. A tidal wave of cats surged my way when I opened her front door. It was all I could do to keep them from spilling out into the yard. All sizes, ages, and colors of felines begged for my attention. Those poor creatures!

The fur babies were out of food. (Problem #1) And without litter boxes. (Problem #2 is, well, #2.) No wonder they were eager to escape!

My next surprise was even more upsetting. I called and called to our hostess. Eventually I found her in a back bedroom. She was close to death. I phoned 911 before leaving her bedside. Looked like heat exhaustion, but I’m not a doctor. The EMTs arrived and carried the pet owner away. Animal control came for the cats, most of which were malnourished and sick.

Just like that, I found myself involved in a mystery with no shortage of suspects. Someone had hoped our hostess would die. Given that many seniors had passed away because of the heat wave, hiding her death should have been easy. If we hadn’t stumbled on her, she wouldn’t have been found for days.

As it turns out, a lot of people wanted Marla dead.

But one person was determined to see that she had justice…me. You can read the whole story in INK, RED, DEAD.

INK, RED, DEAD can be read as a stand-alone, but it is part of a growing series of books. Readers call this: a fun cozy mystery, a good enjoyable read, a delightful story, plenty of suspects, (with a) great ending. Why not take a break from grim reality and peep into Kiki’s world?

As I said above, I love this series. It’s been a few years since I’d read this one, so I reread it for this blog post and review. The mystery is very intriguing and while I didn’t know who the villain was for sure until close to the end, there were a few other things I figured out earlier in the book.

I love Kiki, Anya, Dodie, Clancy, Detweiler, and the rest of the characters in this series! They’re well-rounded characters with interesting back stories. They’re interesting to read about. And the interpersonal relationships intertwine in a complicated way.

Thank you for joining me today on this stop of the Great Escapes Blog Tour. If you wish to visit other participants on the tour, please click on the link below! Have a great day!