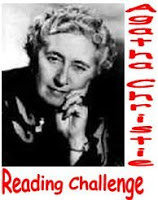 I have no idea why it took me so long to get into Agatha Christie’s books, but it did. Now that I’ve found them, I can’t hardly put them down! Consequently, I chose to join the Agatha Christie Reading Challenge hosted by Mysteries in Paradise. The goal is simply to read every book Agatha Christie has written. There are no time limits. Some people are choosing to read them in publication order, some in series order, some just randomly. I’m doing a little bit of reading them in series order along with a little randomly.

The various series and stand-alone books are listed below. As I finish them, I’ll cross them off with the date. If I write a review up, I’ll link to it.

If you’re interested in joining the challenge – click on the button/link at the bottom of the page. Otherwise, come back later to see if I’ve progressed at all!