Well, I haven’t done so well with this challenge so far. There will be some changes to the lists as there are books on there now that I really have no interest in reading anymore. But I will also try to get back to this. I didn’t read many “new” books during the pandemic. When life is stressful, I like to reread so there’s no angst added.

This challenge isn’t like the others that I’ve made pages for. This challenge, hosted by, Gather Together & Read takes place over anywhere from 5 to 10 years. I’m choosing to do mine over 10 years. The premise of this challenge is to pick 50+ non-fiction books that you’ve really wanted to read and to challenge yourself to finish them in 5-10 years. I have chosen 107 books from various categories of non-fiction that I will be trying to work through in 10 years, which breaks down to between 10 and 11 books per year. Ten to eleven non-fiction books a year will be a challenge for me as I usually read about 3-4 in a year. These are not necessarily books that I own. In fact, most of them I don’t since I only buy books if I know I’m going to read them more than once, but these are the books I’ve discovered over the years that I want to read. You’ll find my list below, which has been separated into categories and each category’s list is in alphabetical order. As I read them, I’ll strike them off with the date next to them and a link to a review if I wrote one.

If you would like to participate in the challenge, please click on the button/link at the bottom of the page to be taken to the main page of the challenge! 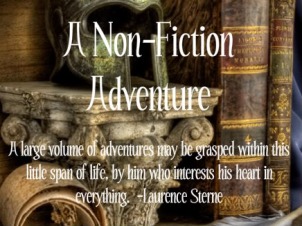