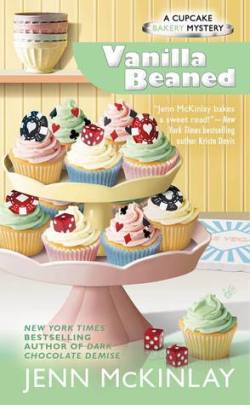 Melanie Cooper and Angie DeLaura are taking a gamble by opening their first franchise of the Fairy Tale Cupcakes Bakery, so where better to hit the jackpot than in Vegas? Business manager Tate Harper has lined up a meeting with Holly Hartzmark, a former showgirl who’s looking to bring Mel and Angie’s sweet treats to Sin City, but Mel isn’t so sure she’s ready to hand her recipes over to a complete stranger—especially one as brash as Holly.

But after the potential bakery location gets blown up, Mel begins seeing another side to Holly—one that reminds her very much of herself. Determined to help a kindred spirit, Mel sets out to discover who is trying to keep the bakery from cashing in. But with a murderous mischief maker on the loose, the odds are stacking up against a happy ending for Mel and her friends…

Vanilla Beaned by Jenn McKinlay is the eighth installment in the Cupcake Bakery Mystery series.

Welcome to another fun, wonderful story about our bakers, Mel, Angie, and Tate and the troubles they always seem to find themselves in! This installment is filled with romance, intrigue, crime, cupcakes, and an adorable 5-year-old who is an expert in all things cupcake. Add in an Elvis impersonator competition, Mel’s employees, Oz & Marty, plus, the handsome police detective, Manny, and you’ve got one crazy, hectic, but thrilling and enjoyable book on your hands.

Our bakery owners find themselves in Las Vegas as they look to start their first franchise, owned by Holly, who is an entirely self-taught, but phenomenal baker. However, as they usually do, the situation goes awry when the first storefront being considered for the location blows up. While the quartet (Mel, Angie, Tate, & our new baker, Holly) try to figure out who is behind the mischief, Melanie finds herself entranced by the baker and her 5-year-old daughter. She decides that maybe franchising isn’t such a bad idea after all.

The story line in this book was wonderful. I did have an inkling of who the culprit was, but only because of something our adorable cupcake expert tells us. One of those details in the story where if you miss it, you’ll probably have no idea until the end who the culprit is, but if you catch on to it, it’s a pretty good clue.

Having a change in setting was great as well. Las Vegas is always a happening town. While the casinos and their shows, gaming floors, extravagant hotels, etc. were featured, you also saw the other parts of Las Vegas, the parts off “The Strip” that you don’t always see in books and movies.

The only criticism I have is that if you’re a long time reader of this series, you know that the seventh book ends on quite the cliff-hanger.  While it’s resolved at the beginning of Chapter 2, it was a little startling to me going from that cliff-hanger to nothing special happening at the very beginning of the book. It’s not a huge deal, but it bugged me.

All in all, it was a thoroughly enjoyable book in the Cupcake Bakery series, one of my favorites in the series, actually. If you like cozy mysteries, give this one a try! Then gobble up the rest of the books in the series too! 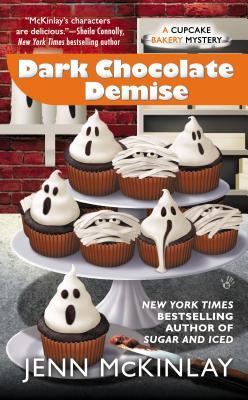 Scottsdale, Arizona, may not be the liveliest place on earth, but it’s never been as dead as this. Hundreds of fans have gathered together for the first annual Old Town Zombie Walk, and Mel, Angie, and the Fairy Tale Cupcake crew are donning their best undead attire to sell some horror-themed desserts to the hungry hordes.

But the fun turns to fright when Mel finds a real dead body in a prop casket outside of the bakery’s truck—and the corpse looks alarmingly like a zombie of their own. Knowing that Joe, Angie’s brother and Mel’s former flame, has been working on a dangerous mob case, Mel worries that the murder is a hit gone wrong and that someone near and dear was the real target. To keep any of her friends from winding up six feet under, Mel will do whatever it takes to find a killer—no matter how scary things get…

Dark Chocolate Demise by Jenn McKinlay is the seventh installment in the Cupcake Bakery Mystery series and I thoroughly enjoyed it.

I’ll admit that the subject matter drew me to the series. After all, who doesn’t like cupcakes?! However, it’s the characters that have kept me reading all this time. I absolutely love Mel, Angie, Tate, Joe, Marty, Oz, and the rest. The shenanigans that Angie and Mel get into are just hilarious and I’m always excited to see what they get up to next!

Normally, I’m NOT a fan of zombies and will generally avoid books that have anything to do with zombies, but I just love this series too much to stay away. The mystery was fantastic and I had no idea who was the real culprit until the end.  Throw in the cliff-hanger ending and WOW – I just can’t wait for the next installment!