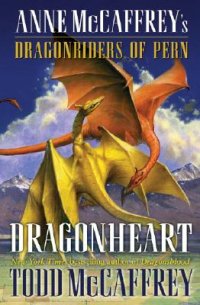 The grim specter of sickness looms over the Weyrs of Pern, felling fire-lizards and posing a potentially devastating threat to their dragon cousins, Pern’s sole defense against the deadly phenomenon that is Thread. Fiona, the youngest and only surviving daughter of Lord Bemin, is just coming of age, and about to assume the duties of a Weyrwoman, when word spreads that dragons have indeed begun succumbing to the new contagion. With the next season of Threadfall quickly approaching, and the already diminished ranks of the dragons once more under siege, every Weyr across Pern is in crisis mode. It is hardly the time for disturbing distractions–such as the strange voice Fiona suddenly hears in her mind at the darkest and most urgent moments.

Circumstances and the mood of the weyrfolk worsen when advance patrols relay the dreaded news that black dust–the unmistakable herald of falling Thread–has been sighted. As more dragons sicken and die, leaving only a new generation of weyrlings too young to succeed them, Weyrleader B’Nik and queen rider Lorana arrive from Benden Weyr to comb Fort Weyr’s archives in a desperate search for clues from the past that may hold the solution to the plague.

But could the actual past itself prove the pathway to salvation for Pern’s stricken dragons and the entire imperiled planet? Guided by a mysterious ally from a wholly unexpected place, and trusting in the unique dragon gift for transcending time, Fiona will join a risky expedition with far-reaching consequences for both Pern’s future and her personal destiny.

Dragonheart by Todd McCaffrey is the 21st book in the Dragonriders of Pern series.

I’ve been a fan of the series since I discovered them in the late 1990’s. I must admit that I was a bit leary when I heard that her son, Todd, was starting to take over the series. I wasn’t a huge fan of the first couple of books that came out under his name, but this one I really love. Fiona and T’mar have become two of my all-time favorite Pern characters and this book really showcases their characters and their development.

In this book, we see Fiona go from a Lord Holder’s daughter to a Weyrwoman. We see her develop through her early teen years trying to adjust not only to the changes in her own body and feelings but also the changes in her life brought on by impressing a dragon. T’mar is an older bronze rider whose path crosses with Fiona’s many times after she first becomes a weyrwoman. Then, they both find themselves back in time at an abandoned weyr which allows their relationship to grow and develop in new ways.

I highly recommend this installment of Pern’s story.