No Charm Intended is the second book in the Cora Crafts Mystery series by Mollie Cox Bryan. It was a delightful read and I definitely enjoyed it more than the first book. 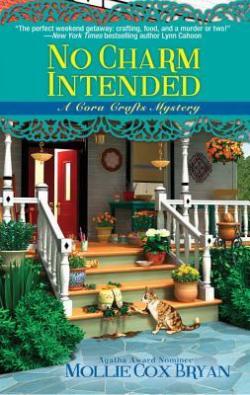 Settling into her new life and career in small-town Indigo Gap, North Carolina, Cora Chevalier is preparing to host a “wildcrafting” retreat at her Victorian home. But a specter hangs over the venture when beloved local nanny Gracie Wyke goes missing. Amidst leading their guests in nature hikes, rock painting and making clay charms, Cora and her business partner, Jane, team up with Gracie’s boyfriend, Paul, to launch their own investigation into her disappearance when the local police prove unhelpful.

Cora and her crafters take Paul in, believing he is in danger and not the suspect police have made him out to be. However as they uncover new clues and a body turns up at a local abandoned amusement park, Cora and Jane begin to question their decision. With more questions than answers arising, is Cora crafty enough to untangle a knot that could put an innocent in jail—and permanently destroy her reputation? (Source: Amazon)

No Charm Intended was a delightful read. I was a little bit leery when I picked it up because I hadn’t really enjoyed the first book of the series, but this one was definitely better and I enjoyed reading it. There were three reasons this book did not get a 4.5 or 5 star rating. 1) It lagged a bit in the middle section, though it does pick up speed again. 2) There just isn’t that extra “pizzazz” that I need for 5 stars. 3) The way mental illness was dealt with in this book, which I explain below.

While we do end up with a murder in this one, the main story line is that of an abduction. I was thrilled with that. Sure, murder makes one of the more “tantalizing” mysteries, but I’m always thrilled when an author decides to go with an abduction or a robbery so something besides just murder as it’s a nice change of pace.

I enjoy our main characters for the most part. They’re well-developed and complex characters. I enjoyed some of the side characters in this book as well.

The setting descriptions are adequate. I wouldn’t have minded a few more details, but it wasn’t too sparse. I was able to imagine most of the places described in the book.

The plot line moved along mostly at a steady pace. There was a small section in the middle where it seemed to lag, but then it picked up again.

The biggest issue I had is with Jane’s reaction to the news of the abducted young woman having a mental illness. We’re made to understood that if Jane had known, she wouldn’t have hired the young lady. Now, I understand that she’s worried about the safety of her daughter, but having a mental illness should NOT be the sole reason you don’t hire someone. I have five mental illnesses. Yes, five. Yet, I spent many years babysitting children and still babysit from time to time with no issues. I understand wanting assurance that the person watching your child isn’t going to have a meltdown. However, instead of just dismissing them out of hand, talk to the person. Is the person taking their meds as prescribed? Are they seeking help for their condition? If they are, there’s very little to worry about. Would you dismiss someone just because they’re diagnosed with cancer or diabetes? Probably not. Those with mental illnesses deserve the same respect.

Other than that, this was a fun book to read and I’m now looking forward to more in the series. 🙂

*** I received an ARC of this book from the author. I was not compensated for my review. All opinions and conclusions expressed are my own. ***

Mollie Cox Bryan writes cozy mysteries with edge and romances with slow, sweet burn. She wrote the Agatha-award nominated Cumberland Creek Mysteries. Several of the books in that series were short-listed for the Virginia Library People’s Choice Award. She makes her home at the foothills of the Blue Ridge Mountains in the Shenandoah Valley, Va.

A Christmas Tartan is a novella that comes in between The Cracked Spine and Of Books and Bagpipes in the Scottish Bookshop Mystery series by Paige Shelton. It’s a wonderful holiday story and a cozy mystery to boot! 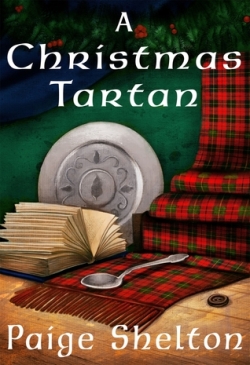 Christmastime has come to Scotland, and Delaney and all her coworkers at the Cracked Spine, the quirky bookshop in the heart of Edinburgh, are all in the holiday spirit. Between mugs of hot chocolate and nibbles of gingerbread, Delaney has been given the task of tracking down the provenance of a mysterious box of objects that her boss, Edwin, has recently acquired. In it are various trinkets, but what really catches Delaney’s eye is a worn copy of A Christmas Carol, where she also finds an old photo tucked inside. On the back is a name, which leads her to a woman whose granddaughter has gone missing. When it becomes clear that the box might be connected to the missing girl, Delaney is pulled into the intrigue, and takes it upon herself to figure out what really happened—and why. (Source: Goodreads)

This novella is a little bit different from the other two full-length novels in this series (I can’t really state how it is different though, as that would give some of the plot away). However, that being said, I really enjoyed this story!

This story deals mostly with Delaney herself. Our other usual cast of characters have very little role in this mystery, but we do see them a little. This story has our heroine checking out the provenance of this mystery box of items. In doing so, she comes across an old, unsolved mystery of a missing young woman.

This is just a fast-paced, fun little mystery to whet the appetite for the second book in the series. It’s definitely fun and a page-turner, but there’s not a lot of character development or personal relationship development in this book. Nothing that really seems important to the overall arc to the series. Yet, it’s still a delightful read.

There’s not much else I can say without spoilers, so I’ll just end with saying pick it up – you’ll enjoy it!!